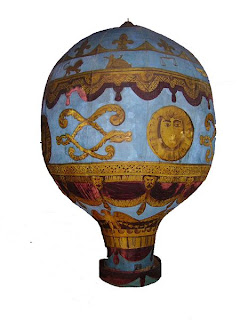 Today, in 1783, Jean Francois Pilatre de Rozier, a professor of physics and chemistry, and the Marquis Francois Laurant d'Arlandes became the first men to fly. Their hot-air balloon, built by the Montgolfier brothers lifted off from La Muettte, a royal palace in the Bois de Boulogne, Paris. They flew nearly 6 miles in 25 minutes, reaching an altitude of around 300-ft. Spectators included Ben Franklin and King Louis XVI, who offered to send two prisoners, but Rozier wanted to deny criminals the glory of being the first men to go into the atmosphere. The Montgolfier brothers, Étienne and Joseph had publicly demonstrated the first unmanned hot-air balloon a few months earlier and a second with animals to verify that air travel was safe for living beings. A model of their balloon can be seen in the London Science Museum and is shown in the picture on the right! On a less lighter note (get it?) the pilot, Jean Francois Pilatre de Rozier, later died in his attempt to cross the English Channel when his balloon exploded. It was an experimental design using a hydrogen balloon and a hot air balloon!
Labels: On This Day