The Polar Bear, by Jane Quigley 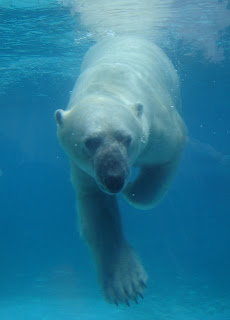 The polar bear is a large bear native to the Artic. It is one of the two largest land carnivore species and the apex predator within its range. It is well adapted to its habitat. Its thick fat and fur insulates it against the cold, also its fur camouflages it from its prey. The polar bear hunts well on land and on the sea ice and also in the water.

Natural Range
The population of polar bears in the artic is just over 20,000. Their main population centres are Alaska, Canadian Artic, Greenland, Svalbard-Franz Josef Land and North Siberia. Their range is limited by the availability of the sea ice that they use as a platform to hunt seals, the main staple of their diet. 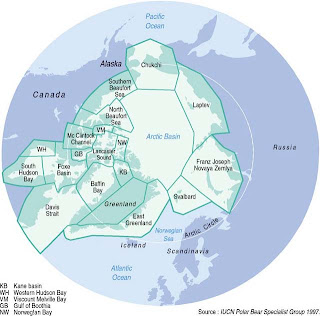 Fur and Skin
Unlike other artic mammals, polar bears never shed their coat for a darker shade in the summer. The fur absorbs ultraviolet light although he hair does not have fibre-optic properties like the artic fox. The thick undercoat does however insulate the bears to a point where they overheat. When polar bears come out of the sea, the water is easily shaken off before it can freeze, also the bears roll in the snow to shed moisture form their coat.

Hunting, Diet and Feeding
The polar bear is the most carnivorous member of the bear family, and the one that is most likely to prey on the human as food. It feeds mainly on seal - especially ringed seals, but will eat anything it can kill. They are enormously powerful predators. Polar bears are excellent swimmers and can often be seen in open waters. Recently polar bears in the artic have undertaken longer that usual swims to find prey, Polar bears are more then capable of outrunning a human. The bears ingest large amounts of vitamin A which is stored in their liver. Polar bears are enormous, aggressive, curious and extremely dangerous to humans.
Breeding 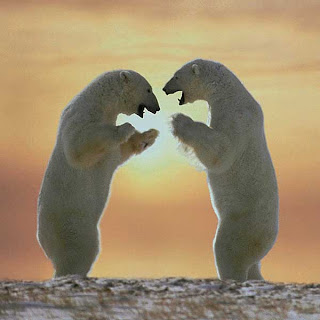 Polar bears mate in the Spring. Males and females form no permanent bond. The gestation period is 240 days and the cubs are born in the early Winter in a cave dug by the mother in deep snow in October. Usually two cubs are born. The cubs are born helpless and blind. They open their eyes at about one month old, they then become able to walk about half a month after that and start eating solid foods at 4-5 months. They remain with their mother learning how to hunt and protect themselves against adult males. Sexual maturity is reached at 3-4 years. They are likely to live till they are 30 years old. Polar bears do not hibernate; they often go without eating for a period of nine months and rely on stored body fat to keep themselves and their cubs alive.