It is reported today that 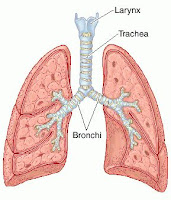 a Colombian woman has received the world's first tailor-made organ transplant, grown by seeding a donor trachea with her own stem cells to prevent her body rejecting it. The success of the operation, performed in June using tissue generated from the woman's own bone marrow, raises the prospect transplanting other organs may be possible without drugs to dampen the immune system, they said. Doctors work hard to match tissue type when transplanting organs so that the body does not completely reject the new organ, but patients usually have to take immunosuppressants for the rest of their lives. Claudia Castillo sought help after a case of tuberculosis destroyed part of her trachea, the windpipe connected to the lungs (as shown in the diagram), and left her with breathing difficulties, prone to infections, and unable to care for her two children. The 30-year-old's only option other than the experimental surgery was for doctors to remove part of her lung - a choice that would have seriously degraded her quality of life, the researchers said. Castillo, who lives in Spain, had no complications from the surgery and left the hospital after 10 days. She is returning to normal activities and even called her doctors from a night club to say she had been out dancing all night, the researchers said. "We believe this success has proved we are on the verge of a new age in surgical care," said Birchall, one of the surgeons who performed the operation, who predicted the technique could be applied to other hollow organs similar in structure, such as the bowel, bladder, and reproductive tract.
Labels: Today's Science News