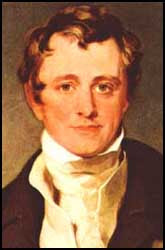 2008 marks the 200th anniversary of the first isolation of the elements barium, strontium, calcium and magnesium, by Humphry Davy in England.
Humphry Davy, a woodcarver's son, was born in Penzance in 1778. After being educated in Truro, Davy was apprenticed to a Penzance surgeon. In 1797 he took up chemistry and was taken on by Thomas Beddoes, as an assistant at his Medical Pneumatic Institution in Bristol. Here he experimented with various new gases and discovered the anaesthetic effect of laughing gas (nitrous oxide). Davy published details of his research in his book Researches, Chemical and Philosophical (1799). This led to Davy being appointed as a lecturer at the Royal Institution. He was a talented teacher and his lectures attracted large audiences. He discovered that the alkalis and alkaline earths are compound substances formed by oxygen united with metallic bases. He also used electrolysis to discover new metals such as potassium, sodium, barium, strontium, calcium and magnesium. Davy was now considered to be Britain's leading scientist and in 1812 was knighted by George III. With his assistant, Michael Faraday, Davy travelled abroad investigating his theory of volcanic action. In 1815 Humphry Davy invented a safety lamp for use in gassy coalmines, allowing deep coal seams to be mined despite the presence of firedamp (methane). This led to some controversy as George Stephenson, working in a colliery near Newcastle, also produced a safety lamp that year. Both men claimed that they were first to come up with this invention. One of Davy's most important contributions to history was that he encouraged manufacturers to take a scientific approach to production. His discoveries in chemistry helped to improve several industries including agriculture, mining and tanning. Sir Humphry Davy died in 1829.
Why he couldn't spell his name properly, though, one will never know!

Humphrey (with an "e") Jones
Labels: People in Science