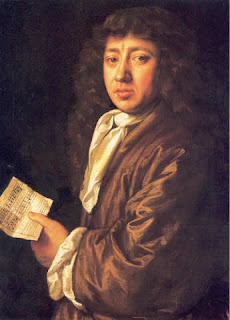 Today, in 1666, the English physician, Samuel Pepys, made a record in his diary describing Richard Lower making the first documented blood transfusion. "Dr. Croone told me ... there was a pretty experiment of the blood of one dog let out, till he had died, into the body of another on one side, while all his own run out on the other side. The first died upon the place, and the other very well and likely to do well. This did give occasion to many pretty wishes, as of the blood of a Quaker to be let into an Archbishop and such like; but, as Dr. Croon says, may, if it takes, be of mighty use to man's health, for the amending of bad blood by borrowing from a better body." Two days later, on the 16th November, Pepys noted meeting with Robert Hooke, and hearing that the dog was very well.

Samuel Pepys' lengthy diary is one of the most famous first-hand accounts of life in the mid-seventeenth century. He wrote it in shorthand, and it contains detailed descriptions of the life of a man in his 20's and 30's engaged in important public service. Pepys was a high-level bureaucrat in the English government who witnessed the chief events of his day including major changes in government, a devastating outbreak of the plague, the Great Fire, and a war with Holland. Luckily for us, Pepys was observant and articulate. His account of the Great Fire is one of the most poignant pieces in the English language.

Labels: On This Day Pause for Thought People in Science