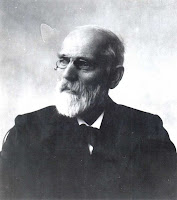 Johannes Diderik van der Waals was born on November 23, 1837. He was a Dutch scientist famous for his work on the equation of state for gases and liquids, for which he won a Nobel Prize in 1910. Van der Waals was born in Leyden, the Netherlands, as the son of Jacobus van der Waals and Elisabeth van den Burg. He became a school teacher, and later was allowed to study at the university, in spite of his lack of classical languages. He studied from 1862 to 1865, earning degrees in mathematics and physics. In 1866, he became director of a secondary school in The Hague. In 1873, he obtained a doctorate degree. In science his name lives on, where polar forces of attraction between molecules are called van der Waals Forces. Van der Waals died in Amsterdam on March 8, 1923.
Labels: On This Day People in Science