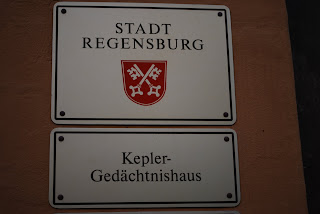 It is not easy gaining admission to the Kepler Memorial Museum at No. 5, Kepler Strasse in the lovely old medieval town of Regensburg in southern Germany. During the half-term I made three attempts - but failed each time. This is a pity as Kepler is a major scientific figure who had a very interesting and somewhat troubled life, and I was particularly looking forward to visiting the museum which is in the house where the great man died.

Johannes Kepler was a brilliant mathematician and astronomer who was one of the first people to champion the idea that the Earth is not at the centre of the universe, and that the planets move in elliptical orbits around the sun. 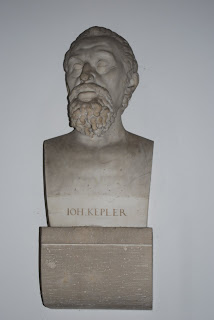 Kepler was born in 1571 in the German town of , near . His grandfather was an industrious and upright man who had moved from to work as a furrier, but Kepler’s father was a drinker who worked intermittently as a mercenary soldier and left home when Kepler was just 9 or 10. Kepler’s young mother, an innkeeper’s daughter, was supposedly argumentative and an amateur herbalist who was eventually tried as a witch.

Kepler was a sickly child who was largely brought up by his grandfather. A bout of childhood smallpox left him with poor eyesight - which later hampered his work as an astronomer. He was intellectually able however and at the age of 17 was sent to to study theology, where he excelled in mathematics, physics and astronomy. When just 22 Kepler was offered the post of Professor of Mathematics at in . However, in 1600 Archduke Ferdinand of decreed that all Protestant citizens must either convert to Roman Catholicism or leave the city – causing Kepler to move to where he joined the Scandinavian astronomer Tycho Brahe. After Tycho’s death, some 8 months later, Kepler took over as Imperial Mathematician (and court astrologer) in . As well as his groundbreaking work in astronomy, Kepler also worked out how the eye works by refracting light and focusing it on the retina.

In 1611 Kepler’s wife died of typhus, and anti-protestant feeling was growing in . This led to a move to in , where Kepler eventually re-married. In 1615 Kepler’s mother was accused of witchcraft in Leonberg, where 6 other accused women had recently been burnt on similar charges. She was imprisoned in 1620, but eventually released due to lack of evidence. Despite all his troubles Kepler continued his work and in 1618 came up with a mathematical relationship between the time taken for a planet to orbit the sun and its distance from the sun (supporting the conclusions of Copernicus). He published Harmonice Mundi in 1619 and his Epitome of Copernican Astronomy between 1618 and 1621. In 1627 he published a set of tables (based on the work of Tycho) which allowed people to calculate the future positions of the planets with great accuracy. Anti protestant legislation spread across the whole of in 1628 and Kepler moved to the town of in , where he worked as court astrologer and wrote one of the first science-fiction stories, Dream of the Moon. 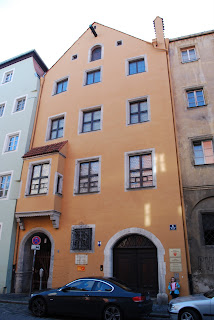 Once again politics and religious strife combined to make Kepler’s position untenable and he decided to travel back to to reclaim some money still owed to him. He arrived en route to Linz in on November 2nd 1630, where he took to bed with a fever and died 13 days later.