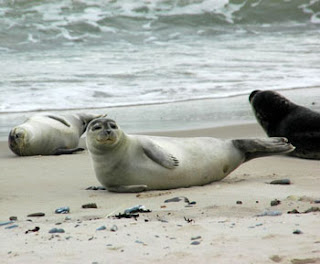 "True seals (or ‘earless seals’) are amphibious pinniped mammals, and are closely related to the group of mammals known as the Carnivora (which includes the dog and cat families). Pinniped means ‘fin-footed’, and seals are highly adapted for life in the sea, although they have to return to land to give birth. Other pinniped mammals are the fur seals (‘eared seals’), sea lions and the walrus.

There are two resident species of seal in : the common seal Phoca vitulina - pictured above - (called the ‘harbor’ seal in ) and the grey seal Halichoerus grypus - pictured below. Common seals occur in the Pacific and oceans, and are generally thought to be less aggressive and to look ‘cuter’ than grey seals. Common seals can be black, brown, grey or tan in colour with dark or light patches. The larger grey seal has a more dog-like head, and half the world’s population is found off the coasts of the . The common seal pups are born around June and July, and the grey seal pups are born later in the year from October to November. 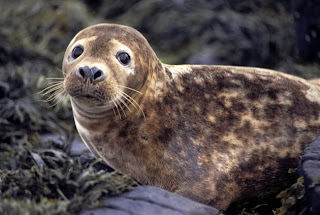 Our friends at the Irish Seal Sanctuary in Garristown, north are an entirely voluntary organisation who’s goal is to “provide shelter treatment and rehabilitation for rescued marine wildlife found in difficulty around ’s coast”. They have an excellent website at http://www.irishsealsanctuary.ie/ which explains their work and has good links and details about individual seals etc. Please have a look!