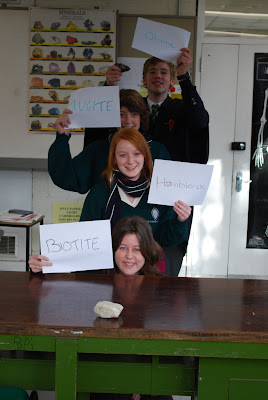 When magma cools and solidifies, different minerals crystallise out at different temperatures. One of the first minerals to form is olivine, and if the magma is at or near the Earth’s surface and cools quickly this olivine will remain as part of the rock produced. However, if the magma cools more slowly (i.e. at greater depth), there is time for the olivine to be broken down again, and for its atoms to be incorporated into a different mineral – such as augite. If cooling is suitably slow, this augite may in turn be broken down and reconstituted as hornblende...... and so on. This explains how identical magmas may cool to produce rocks with different mineral assemblages in them, and why for example olivine may be more common in basalt (which cools rapidly on the Earth’s surface) than in gabbro (which cools slowly deep beneath the Earth’s surface).