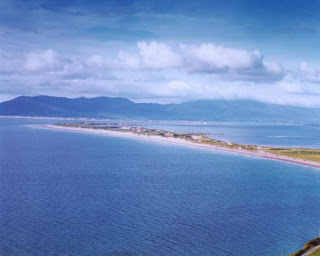 While visiting Kerry this Christmas, I paid a visit to one of my favourite places in the world, Rossbeigh Beach in Glenbeigh, Co. Kerry. An amazing six mile expanse of sand, directing outwards into Dingle Bay, Rossbeigh is one of the finest beaches in Ireland, and a childhood haunt where I used to frequent for a swim or a run on a regular basis. But to my surprise and horror, I found that Rossbeigh had recently been hit by coastal erosion. Over 1,200ft of the famous sand dunes disappeared into the sea in mid December, creating a five-acre island of sand out of what remains of the northern end of the spit. It's now only a matter of time before this is washed away too, taking with it the historic Rossbeigh Strand Tower which has been a landmark at the entrance to Castlemaine Harbour for over a century. Concerns have also been raised over what now remains of the strand. More ominously, home owners in areas such as Incharee and Dooks could now be under threat as the sand dunes had acted as a natural barrier from the open Atlantic. While coastal erosion is a natural phenomenon, local residents have warned that they may take measures into their own hands in an effort to bolster what remains of the strand. The unprecedented move follows news that Kerry County council simply does not have the money to fund coastal protection works, claiming that the cost would far exceed the recent €4m repair project at Inch which has left the local authority with a €2 million debt. Inch has already soaked up the €250,000 coastal protection budget for next year. I certainly hope that the beach can be restored and protected, as so many fond memories were made there. The picture above shows the beach in it's glory. I didn't have my camera with me when I visited but will post a picture outlining the damage as soon as one becomes available.
Labels: Fragile Earth Nature Notes Teacher Travels