Last week we wrote about the Natterjack Toad, one of Ireland's three native amphibians. Today is the turn of our only frog, the common frog! 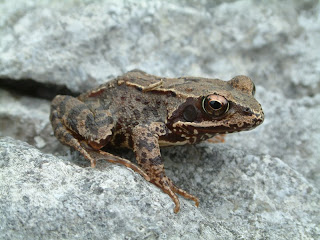 The Common Frog (Rana temporaria) is considered to be widespread and common in Ireland but vulnerable in the rest of Europe. The Common Frog is found in countryside and urban garden ponds and in a range of habitats from lowland farmland to mountain bog and forestry plantations. The frog breeding season may only last a few nights in a pond, after which the adults move away to forage for food on land in other types of habitat. In winter frogs hide in frost-free refuges, under tree stumps, in turf stacks or in rock piles, where they enter torpor until the following spring. Common Frogs' flanks, limbs and backs are covered with irregular dark blotches and they usually sport a chevron-shaped spot on the back of their neck. Common Frogs have relatively short hind legs and possess webbed feet. Their eyes are brown with transparent horizontal pupils, and they have transparent inner eyelids to protect their eyes while underwater, as well as a 'mask' which covers their eyes and eardrums. Males are distinguishable from females due to hard swellings on their first finger. These are used for gripping females during mating.Also, during the mating season, males' throats often turn bluish. Although not feeding throughout the breeding season, adult Common Frogs will feed on any invertebrate of a suitable size. Favourites include insects, (especially flies) snails, slugs and worms. Common frogs are active almost all of the year, only hibernating when it gets very cold and the water and earth are consistently frozen. In the Ireland, common frogs typically hibernate from late October to January. They will re-emerge as early as February if conditions are favourable, and migrate to bodies of water such as garden ponds. Common frogs breed in shallow, still, fresh water such as ponds, with breeding commencing in March. The adults congregate in the ponds, where the males compete for females. The courtship ritual involves croaking, and a successful male grasps the female under the forelegs.
Labels: Ireland's Amphibians Ireland's Fauna Nature Notes