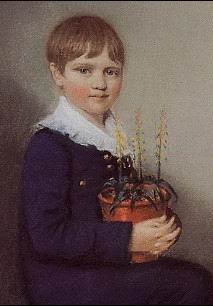 Darwin (or "Charley" as he was known by his family) described himself as being "a rather naughty child". This is borne out in his stories of stealing fruit from the orchard trees on the side of his parents' house, making up wild stories, and striving to be the centre of attention in the family. He was also a very clumsy boy. Darwin recounts one story of his childhood in which he was strolling along a stone wall, apparently lost in thought, and walked right off the edge and fell about eight feet to the ground!
Charley had excellent athletic abilities, being a swift runner and an excellent rock thrower. There are some indications that he was a rather gullible child. On one occasion a childhood friend of Darwin's convinced him that if he went into any shop in Shrewsbury and wore a special hat which he moved in a certain way for the shopkeeper, he could take whatever he wanted for free. Well, Darwin tried the hat in a bakery shop, took some cakes, moved the hat for the shopkeeper, and headed out the door. Imagine the shock when the man made a rush for poor Darwin as he dropped the cakes and ran for dear life!
Ironic as it may seem, Charles Darwin was a lazy young man, and a slow learner in school. He was at first educated by his sister, Caroline, before attending Revd. Case's grammar school in Shrewsbury. He was a rather shy student but he did take great pleasure in showing off his athletic skills to the other school boys. It is not known how well Darwin did at Revd. Case's school, but it is safe to say that he was an unremarkable student.
The first sparks of interest in natural history were developed very early in his childhood. Darwin relates how his mother, Susannah, taught him how to change the colour of flowers by giving them water mixed with food colouring. He was also, at a very early age, interested in the variability of plants, and was perhaps influenced here by the gardens his father kept at the house. As a young boy he delighted in collecting minerals, insects, coins, stamps and other odd bits. Darwin did not, however, put much study into these objects, and seems to have collected them for the mere pleasure of it. Darwin also had an extreme fondness for dogs - easily winning their affection, and took great pleasure in fishing along the River Severn that flowed along the back of his parents' house.
How did his love of natural science develop? His increased interest in natural science was spurred on by events outside his formal education. These events were: (1) the many hikes he went on in North Wales, (2) a book he read many times during this period, and (3) helping his brother, Erasmus, in his chemistry lab in the back garden. They conducted experiments from 1822 until Erasmus set off for Christ's College, at the University of Cambridge, to study medicine.
At the age of sixteen, Charles was taken aside by his father Robert and told that it was time for him to make something of himself. He would go to the University of Edinburgh, where his father and grandfather had trained to become doctors. His brother Erasmus, who had been studying medicine at the University of Cambridge, would join him there. On Saturday we will publish some detail about his time in Edinburgh!
Labels: Darwin's Bicentenary People in Science