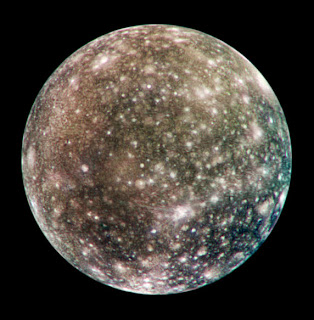 Today, in 1610, Galileo Galilei discovered Callisto, the fourth satellite of Jupiter. Galileo originally called Jupiter's moons the "Medicean planets", after the Medici family and referred to the individual moons numerically as I, II, III and IV. Galileo's naming system continued in use for a couple of centuries until, in the mid-1800's other moons of Jupiter were discovered and to avoid confusion the names Io, Europa, Ganymede and Callisto were officially adopted. It is now known that Callisto is larger than the planet Mercury, and composed mostly of water and water ice with large quantities of ice exposed on the surface.
(Adapted from Today in Science History)
Labels: Astronomy On This Day Physics Stuff