Science Fact of the Week 6 - The Aurora Borealis

After the Christmas Holidays, I would like to welcome back our Science Fact of the Week Feature! This week it's the Aurora Borealis or Northern Lights! 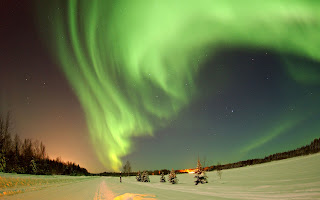 The sun gives off high-energy charged particles (also called ions) that travel out into space at speeds of 300 to 1200 kilometres per second. A cloud of such particles is called a plasma. The stream of plasma coming from the sun is known as the solar wind. As the solar wind interacts with the edge of the earth's magnetic field, some of the particles are trapped by it and they follow the lines of magnetic force down into the ionosphere, the section of the earth's atmosphere that extends from about 60 to 600 kilometres above the earth's surface. When the particles collide with the gases in the ionosphere they start to glow, producing the spectacle that we know as the auroras, northern and southern. The array of colours consists of red, green, blue and violet.
The Northern Lights are constantly in motion because of the changing interaction between the solar wind and the earth's magnetic field. The solar wind commonly generates up to 1000,000 megawatts of electricity in an auroral display and this can cause interference with power lines, radio and television broadcasts and satellite communications. By studying the auroras, scientists can learn more about the solar wind, how it affects the earth's atmosphere and how the energy of the auroras might be exploited for useful purposes.
Labels: Science Fact of the Week