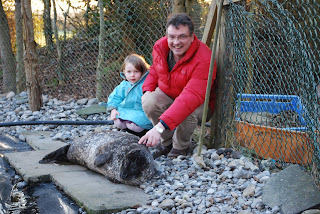 Yesterday Anna and I spent a wonderful afternoon visiting the Irish Seal Sanctuary in Garristown, where we were shown around by the very knowledgeable (and kind!) Brendan Price. There are 14 pups resident at the moment, mainly grey seals (as they tend to breed late in the year), although we were also introduced to Benny an extremely placid common seal. In general it is not a good idea to try and touch seals, but Benny is a bit of a special case – and we were able to stroke him and get up close and personal (see picture). We were also lucky enough to meet a very relaxed looking badger who is awaiting a hip operation after being hit by a post van. 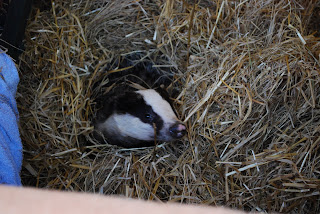 Seal milk is extremely rich and grey seals suckle for about three weeks, before gradually switching to a diet of fish. To stand a good chance of surviving, the pups need to triple their weight during the period of suckling.
The sanctuary has a series of small pens for the younger pups, and a large pool for those nearing their release date. We saw the 4-00 pm feed, and watched some of the younger pups trying to get the hang of eating fish for the first time. Having already had a morning and midday feed, the five older pups in the big pool seemed a bit half-hearted about their evening meal, preferring instead to chase around with each other – which is probably a good sign! 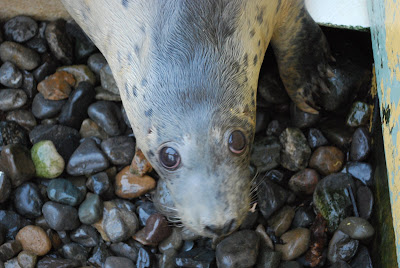 The work of the sanctuary is carried out by volunteers, who come from all around the world. The seal pups are treated for any illnesses, and fattened up with the sole aim of being reintroduced into the wild as soon as possible. The policy is to try and release the pups as near to where they were found as possible, and forthcoming releases are flagged up on the ‘news’ section of the sanctuary website: http://www.irishsealsanctuary.ie/
JJS
Labels: Nature Notes Teacher Travels