I can't believe we are a few months into The Frog Blog, without some factual froggage or in this case toadage! Over the next few weeks we will bring you up to date with Ireland's amphibians. Today is the turn of our only toad, the Natterjack. 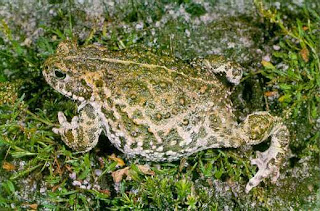 The Natterjack Toad is a Western European species being particularly common in Spain and Southern France. In Ireland they are native to only a few parts of Co. Kerry, particularly around the areas of Cromane and Dooks near Killorglin (my home town). It is thought to be an immigrant from the end of the Ice Age. The Natterjack is easily recognised by the yellow stripe along the centre of its olive green, wart covered back. These warts can be either yellow, red or orange in colour. The legs are pale grey with green blotches and the underside is also pale grey and spotted with green. The most important feature that distinguishes the Natterjack from other species of toad is the length of the hind legs. Natterjacks have much shorter hind legs than other toads and frogs. Males and females are of similar size and grow to about seven centimetres from snout to vent in about two or three years. They prefer habitats with loose, sandy soil, such as sand dunes and lowland bogs. They dig burrows in the soft sand and they tend to live in groups. Natterjacks are mostly nocturnal. They tend to rest under large stones, or in crevices and burrows during the day. Their short limbs mean that they are unable to leap very far and are generally seen running. They are also poor swimmers and are known to drown quickly in deep water if they cannot get ashore. Natterjacks emerge from hibernation in March and head off for their breeding sites. Adults feed on insects, particularly moths, as well as spiders, woodlice, snails and worms. The tadpoles feed on algae and vegetation until they are about 38 days old when they begin to feed on animal tissue.

Male toads arrive at the breeding sites first, which are usually in very shallow water and are often brackish. The females spawn a string of eggs, maybe 3000-4000, which hatch within 5-8 days. Natterjack toad tadpoles are the smallest of all European tadpoles. Depending on the environmental temperature, metamorphosis can take anywhere between 5 and 16 weeks.
Spawning occurs between April and July and the nighttime croaking of the male can be heard at great distances.

The Natterjack has a coat which can be poisonous to its predators.