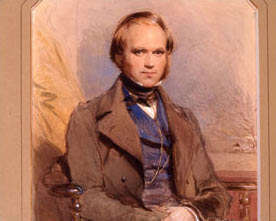 In 1825, At the age of 16, Darwin followed in his father's footsteps and began his university studies in medicine in Edinburgh. Charles's brother Erasmus also came to Edinburgh in 1825 for a hospital residency after completing his course work at Christ's College in Cambridge. At first they were both enthusiastic about learning if not about lectures, taking out more books from the library than all the other students combined. But Erasmus stayed in Edinburgh for only four months, after which he returned to Shrewsbury to assist his father, leaving Charles to face the trials of medical training alone.
Edinburgh was the best choice for studying medicine for Charles, but unfortunately it proved not to be something for which he had any particular enthusiasm. Although he had spent the summer of 1825 in Shropshire helping his father treat the local poor, and found it satisfying, he found little to like at Edinburgh. While he found the lectures "intolerably dull" - even those on zoology, which was to become his life-long passion, he did start to take a few tentative steps into the world of science, including becoming a member of the Royal Medical Society. He found the anatomy sessions disturbing; he attended two surgeries, both done without anaesthesia. After the second, a particularly gruesome operation on a small child, he swore never to return to the operating room. Charles spent the summer of 1826 hiking through North Wales with friends, and then went to Maer, the Wedgwood estate, to hunt rabbits, birds, and foxes.

In his second year, 1826–1827, Charles was just as dissatisfied with his lectures and had lost his enthusisam for the library. He did, however, become a friend of Dr. Robert Grant, a physician and lecturer at Edinburgh with a particular interest in marine biology. Grant took him to meetings of the Wernerian Society, where he heard lectures by the master bird-watcher John Audubon and others. During the two years at Edinburgh Darwin almost certainly heard about the idea of evolution for the first time. But the evolution he heard about remained a vague, mysterious process that depended on unknown mechanisms. It was starting to seem clear to some that all living beings were related, but as of yet it was difficult to say how they were related.

The combination of his lack of interest in medicine with his absolute squeamishness at the prospect of surgery boded ill for his success in the profession. His father scolded him for his "indolent" lifestyle. After Charles's second year at Edinburgh, Robert Darwin, realising that Charles would not follow in his footsteps, encouraged him to seek another occupation. His father sent him to Christ's College in Cambridge to study to become an Anglican Parson. He became a close friend and follower of botany professor John Stevens Henslow and met other leading naturalists who saw scientific work as religious natural theology. He completed his studies in 1831, and after he graduated he was offered a situation by Henslow for a self-funded place with captain Robert FitzRoy on HMS Beagle, which was to leave in four weeks on an expedition to chart the coastline of South America. His father objected to the planned two-year voyage, regarding it as a waste of time, but was persuaded by his brother-in-law, Josiah Wedgwood, to agree to his son’s participation.
The next post will describe Darwin's trip on the Beagle and how it inspired him to develop his Theory of Natural Selection.
Labels: Darwin's Bicentenary People in Science