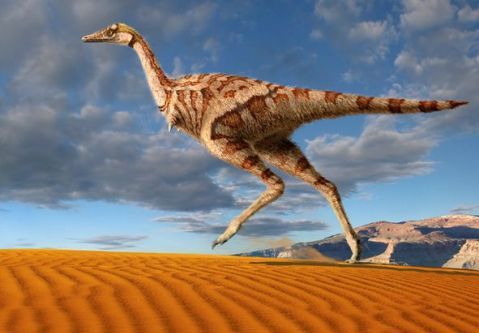 A two legged, one fingered digging dinosaur has been discovered by palaeontologists, including Dr David Hone from UCD's Biology and Environmental Science Department, in Northern China. The parrot sized relative of T. rex is the first dinosaur to be found with just one finger on each hand. The new species, Linhenykus monodactylus is a member of the theropod dinosaurs, the group of two-legged carnivores that includes Tyrannosaurus rex and Velociraptor. Most theropods had three fingers on each hand. It is believed that the dinosaur used its extended finger to burrow through termites nests. The new dinosaur was discovered in a fossil-rich rock formation that dates to the late Cretaceous period, between 84 and 75 million years ago. The site is near the Inner Mongolian town of Linhe, which helped inspire the new dinosaur's name. Click here to find out more about this latest dino discovery.
Labels: Dinosaurs Today's Science News Todays Science News