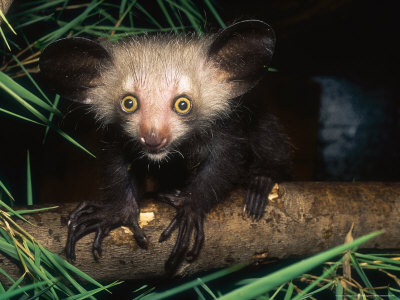 Native to Madagascar, the Aye-aye (Daubentonia madagascariensis) is a strange animal that combines rodent-like teeth with a long, thin middle finger to fill the same ecological niche as a woodpecker. In reality, the Aye-aye is the world's largest nocturnal primate spending the entire day curled up in a ball-like nest of leaves and branches. The Aye-aye is famous for it's aforementioned thin middle finger, which it uses to great effect in its hunt for food. The Aye-aye taps on trees to find grubs, then gnaws holes in the wood and inserts its elongated middle finger to pull the grubs out. The digit is also useful for scooping the flesh out of coconuts and other fruits that supplement the animal's insect diet.

In grave danger of extinction, the Aye-aye's habitat is quickly being destroyed. The forests of Madagascar are being cleared for sugar cane and coconut plantations, leaving the Aye-aye without food or home. Many people in Madagascar see the Aye-aye as a bad omen, and many of these weird yet wonderful animals are killed on sight. The Aye-aye is now protected by law.
Labels: Mammalia Weird and Wonderful Animals