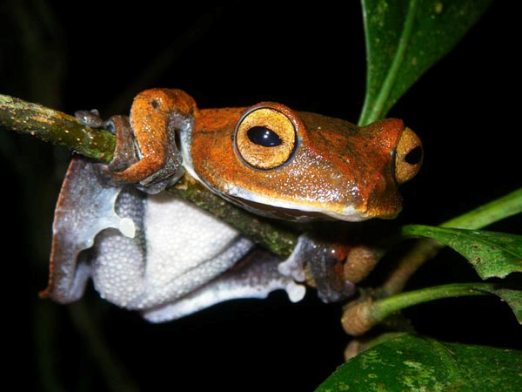 A new species of frog, the Vampire Flying Frog (Rhacophorus vampyrus) has been discovered in the jungles of Vietnam. The odd amphibian earns its gruesom name from its tadpoles black fangs, the first time such a feature has been found in tadpoles. The tadpoles do not suck blood however. The frog is unable to truly fly either, as the name might suggests, but is able to glide from tree to tree using its webbed toes.
The tadpoles fangs, described as "keratinised hooks" in the journal entry on the species, may possibly be used for hunting or eating, though they seem to project too far outwards from the mouth to be much use for those activities. They could also be used as anchor points to help the tadpoles grip the sides of small ponds in tree holes where the frogs breed and live. The adult frogs (just 5cm long) spend most of their lives in trees and lay their eggs in pools of water formed within the tree structure. As mentioned before, they sport unusual amounts of webbing, thus giving them the ability to glide.
For more information visit the National Geographic website.
Labels: Extra Froggage Today's Science News Todays Science News

Thomas said…
This vampire flying frog looks pretty cool. It is wonderful to know that such exotic creatures exist in Vietnam. I love those colors too.