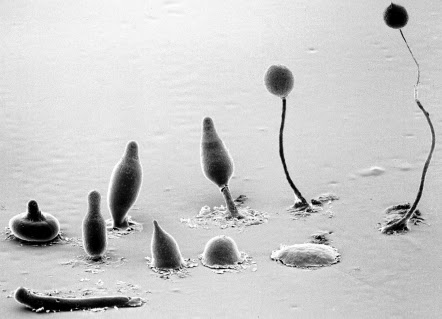 Amoeba are some of the simplest organisms on the planet. While just a single cell, barely visible to the naked eye, these organisms still display all the characteristics of living things. Now, new research has been published in Nature which suggests that one type of singled celled Amoeba (Dictyostelium discoideum, commonly called Slime Mould) appears to "farm" bacteria for food. The researchers have shown that when the bacteria become scarce, the slime mould gathers up into a "fruiting body" and produces spores, which disperse in the wind to new areas. The scientists have discovered than one third of these spores also contain the bacteria that form the diet of the slime mould, thus allowing the new generation begin farming these bacteria for food. The team of researchers, based in Copenhagen, also discovered that the behaviour is genetically programmed, as only amoebae from "farming" parents behave in such a way. For more information on this story, click here to visit the BBC Science website.
Labels: Today's Science News Todays Science News