Stem Cells - The Future of Medicine?

This post is designed to aid teachers and pupils in a classroom discussion on the issues around Stem Cells. This article first appeared in the January issue of Science Spin and was written by Frog Blogger Humphrey Jones. 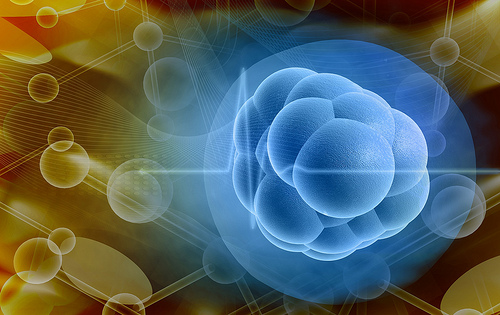 Stem Cells – The Future of Medicine?
Your body is made up of around 100 Trillion cells. Most of these cells have a specific function – they might be skin cells, bone cells, muscle cells, nerve cells or blood cells – but some have yet to be given a specific role in the body yet. These cells are stem cells. Scientists are keen to learn about how stem cells work, especially how they can be “differentiated” (turn into specific tissues), and hope that many diseases, like diabetes or even Alzheimer’s, could be cured as a result of their research. However, there are some significant issues surrounding stem cells and the research being carried out.
Types of Tissue
Stem cells are cells in your body which have yet to be “differentiated”, that is they potentially can become any type of body tissue. The four categories of body tissues are epithelial, muscle, nervous or connective. Epithelial tissues serve as protective coverings for different parts of the body including the lining of your gut, the outer layer of cells around your organs and even the outer layers of your skin. Muscle tissue is composed of cells that can “contract”. Some of these cells form the muscles attached to your skeleton but more are found in your gut and a special type of muscle is found in your heart – this muscle never tires! Nervous tissue cells have the ability to generate and conduct electrical impulses and serve as messengers in your body while connective tissues support the various structures of your body and including tendons, ligaments, bone, cartilage and the inner layers of your skin. As mentioned before, stem cells can potentially become any of these types of cells thus could be used to repair any part of your body. For discussion: Why do scientists want to use stem cells? How could stem cells be used in the body? Where are stem cells made in your body?
Types of Stem Cells?

Stem cells can be classified as either “adult stem cells” or “embryonic stem cells”. Adult or somatic stem cells exist throughout the body after embryonic development and are found inside of many different types of tissue. These stem cells have been found in tissues such as the brain, bone marrow, blood, blood vessels, skeletal muscles, skin, and the liver. They remain in an inactive state for years until activated by disease or tissue injury. Adult stem cells can divide or self-renew indefinitely, enabling them to generate a range of cell types from the originating organ or even regenerate the entire original organ. Adult stem cells are thought to be “mulitpotent”, that is they have the ability to change into many types of human cells but not all. Embryonic stem cells come from a four or five day human embryos. At this stage the newly formed organism is nothing more than a ball of cells called a blastocyst, but these cells can still form any type of tissue. Embryonic stem cells are described as “pluripotent”- that is, they are capable of generating any and all cells in the body under the right conditions. For discussion: Why are “pluripotent” cells so important? Which type of stem cells has more potential in research / medicine? What is a blastocyst? Is it right to fertilise eggs to create stem cells for research?
Stem Cell Therapy
Stem cell therapies are currently being used to treat forms of leukaemia or cancer of white blood cells. This involves the injection of bone marrow tissue, or more recently umbilical cord blood stem cells, into the bones of cancer sufferers. The intention is that these new stem cells will then form new blood cells to replace the ones damaged by the cancer. Scientists and medical professionals believe that stem cells could be used to treat a whole range of diseases in the future including heart disease, diabetes, cancers, spinal injuries, deafness, blindness or even replace missing teeth! But there are also some concerns that patients across the world are being sold “bogus” stem cell treatments and that these are not being regulated appropriately. For discussion: What are the potential uses of stem cell therapies? Why are these treatments currently not being used? Which type of stem cells is best suited to these treatments? When will these therapies become common practice? What “bogus” treatments are currently being offered?
Stem Cell Research
In order to fully realise the potential of stem cell therapies, scientists need to carry out experimental research on how these cells grow, divide and differentiate. Programming a stem cell to become a nerve cell, for example, isn’t easy. Scientists don’t know how to trigger stem cells to differentiate into the type of cell needed by the body. So scientists are busy working and testing these cells seeing if they can control the differentiation process more effectively. In order to do this, they need access to stem cells. The easiest way to get stem cells is to get them from four or five days old embryos – fertilised eggs. As mentioned before, embryonic stem cells are pluripotent so can potentially be changed to any type of cell, making them more important for researchers too. But there are considerable ethical issues surrounding their use. Many individuals, including religious groups, believe that a blastocyst, although only a few days old and consisting of around 100 cells, is technically a living thing and destroying it is ethically and morally wrong. Until recently, scientists in the United States could not receive state funding for embryonic stem cell research but President Obama lifted this ban last March and has pledged to “vigorously support” new research in the area. In Ireland it is currently illegal to produce embryonic stem cells and there is currently no legislation governing embryonic stem cell treatments. Many groups, including the Irish Stem Cell Foundation, are calling for its introduction immediately. They believe that proper legislation could accelerate the research in the area and aim to educate Irish patients about stem cell treatments. For discussion: Are the use of embryonic stem cells ethically wrong? Should embryonic stem cell research be government funded? Why hasn’t the Irish government introduced legislation around stem cell research? Should only adult stem cells be used for research? Are there other alternatives?
When Does Life Begin?
Central to the debate on the use of embryonic stem cells in the question: when does life begin? Although just a ball of cells, pro-life groups think that destroying human life at any stage is wrong! For discussion: When does life begin? Is a blastocyst living? Is destroying a blastocyst a necessary evil in the quest to cure human disease?
Human Cloning
Some scientists believe that we could use human cloning technology (somatic cell nuclear transfer) to create cells similar to embryonic stem cells and use these cells as an alternative to creating and subsequently destroying human blastocysts. However, the use of this technology is not without its ethical concerns! For discussion: Should human cloning technology be used as an alternative to embryonic stem cells? How can human cloning be controlled?
Conclusion
It is clear that stem cells can play a significant role in the future of human medicine but many questions are currently left unanswered. A class discussion is a great way to get pupils interested in this fast moving and controversial area of scientific research!
Resources:
Irish Stem Cell Foundation: www.irishstemcellfoundation.org
Stem Cell Schools: www.stemcellschool.org
Labels: Class Discussion Medicine Science Spin