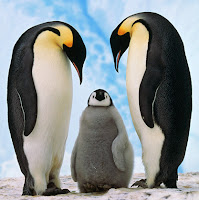 Emperor penguins are the largest of all the penguins standing 120 cm tall (almost 4 ft.) and weighing 30 to 40 kg. They live and breed at the beginning of Winter, on the fast ice all around the Antarctic continent. The total population is estimated to be about 200,000 breeding pairs. Emperor penguins can mate when they are 4 years old and can live to be 20 years of age. Emperors live in the coldest climate on earth. Temperatures can drop as low as -60 degrees celsius on the Antarctic ice. After mating, the female lays one large egg. The egg is then immediately rolled to the top of the male's feet. The egg is then incubated (kept warm) on the male's feet by a thick fold of skin that hangs from the belly of the male. The males manage to survive by standing huddled in groups for up to 9 weeks. During this time the female returns to the open sea to feed. During the time the male incubates the egg, he may lose about half his body weight because he does not eat. When the egg hatches the female returns to care for the chick. Once the female returns, the male will go to the open sea to feed. The male will return in a few weeks and both male and female will tend to the chick by keeping it warm and feeding it food from their stomachs. After 7 weeks of care, the chicks form groups called "créches" and huddle together for protection and warmth. They are still fed by the parents. The chicks know their parents by the sound of their call. The chicks are fully grown in 6 months, which is the beginning of the Summer season in the Antarctic. At this time all

the penguins return to the open sea. The shape of their body helps them to survive. They have short wings that help them to dive up to 275 m (900 feet) to catch larger fish. They can swim 10-15 kilometers an hour which lets them escape their main enemy, the leopard seal (shown on your left). They can stay warm because they have a thick layer of down under the outer feathers and a layer of blubber. The layer of downy feathers traps air that keeps the body heat in and cold air and water out. They also have large amounts of body oil that aids in keeping them dry in the water.
Labels: Nature Notes Penguin Corner