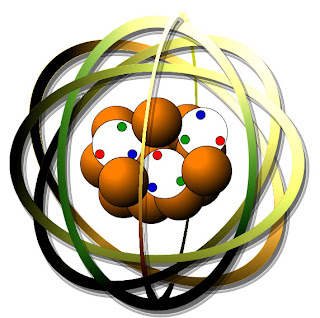 Today, in 1932, the neutron was discovered by Dr. James Chadwick. Until 1932, the atom was known to consist of a positively charged nucleus surrounded by enough negatively charged electrons to make the atom electrically neutral. Most of the atom was known to be empty space, with its mass concentrated in a tiny nucleus. Research was showing that the nucleus of an atom contains more than just protons. This was because the atomic mass of the atom of most elements was greater than the atomic number (number of protons). Electrons contributed nothing to the atomic weight, so there must be some other particle in the atom. Another scientist, Ernest Rutherford (who worked at Cambridge University Nuclear Physics Laboratory with Chadwick from 1918 when he was released from being a prisoner of war in Germany during WW1) suggested that there were electrons as well as protons in the nucleus, canceling out some of the positive charge, but there was no way of telling if this was the truth. In 1932 Chadwick heard of a new method of detecting particles emitted by radioactive elements developed by Irene Joliot-Curie, one of Marie Curie's daughters, and her husband, Frederic. He used this new technique and discovered that there were different particles in the nucleus which were neutrally charged. These particles became known as neutrons and revolutionised the study of radioactive elements. Soon after this, neutrons were used to bombard uranium atoms, which led to the discovery of nuclear fission and the development of both the atomic bomb and nuclear power.
Labels: Chemistry Stuff People in Science Physics Stuff Today's Science News