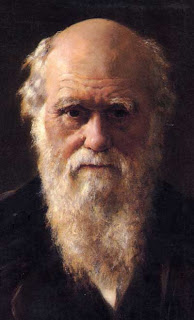 Following his return to England in 1836 Darwin arranged his notes and read voraciously across many fields of science, filling notebook after notebook with his insights. By 1838 he began to make notes about the formation of new species and on his theory of evolution by means of natural selection. He expanded these ideas into a 35-page paper and then into a 230-page paper, in 1842 and 1844, respectively. However, he did not publish his ideas at this time, apparently intending to keep working to produce a larger, more impressive book.
His most famous book The Origin of Species by Means of Natural Selection or The Preservation of Favoured Races in the Struggle for Life, was published in 1859 and (despite the lack of a snappy title) became an instant best-seller, and an instant source of controversy. Controversy continues to this day, although the notion of evolutionary change is now firmly established as a major paradigm of the natural sciences. In 'The Origin' Darwin talks much about pigeons, dogs, beetles, and other forms of life but says nothing of man. Of humans, he only enigmatically says that light will be thrown on the origin of man and his history. In subsequent editions Darwin revised the text to read "much light".
Altogether, Darwin wrote 14 books, in addition to 4 monographs on the taxonomy and biology of barnacles, and his narrative of the Voyage of the Beagle. After Darwin had written down his ideas in his long paper of 1844 he was stricken with bouts of bad health and several tragedies in his personal life. He also spent 8 years working on his barnacle monographs, an accomplishment which made him the world's leading authority on barnacles. These events were responsible for some of the delay in writing his "big book" on natural selection.
In 1871 his book The Descent of Man was published, in which he argued that humans were no different from all other forms of life, and that we too, in our evolutionary history, have been influenced by the forces of natural selection. Then, in The Expression of the Emotions in Man and Animals, published in 1872, he dared to claim that most of our refined and most particularly human behaviour - the expression of our emotions - also reflected our evolutionary past.

In 1839 he married his cousin Emma Wedgewood. They had 10 children together, 7 surviving to adulthood, and lived a long and happy life together, untouched by the slightest hint of poverty or scandal. After living several years in London they moved to a country house at Downe in Kent about 16 miles from the outskirts of London. Darwin never again left the British Isles and rarely travelled far from Down House.
Darwin was not an atheist. He described himself as an agnostic, and it is likely that he retained a belief in some kind of personal God, although not a deity who, like some master puppeteer, took a direct and continuously intervening role in the evolutionary process and in human affairs. In early 1882 he had several minor heart attacks. His condition worsened and on April 19th, 1882, at 73 years of age, he died at Down House, after several hours of nausea, intense vomiting and retching, symptoms of a chronic illness that bedevilled him for the last 40 years of his life. Darwin's last words, spoken to his wife Emma, were, "I am not in the least afraid to die."
On April 26th, 1892 Charles Darwin was laid to rest in Westminster Abbey only a few feet away from the grave of Sir Isaac Newton. His pallbearers included Alfred Russell Wallace (a man also accredited with the theory of Natural Selection) and the two scientists who were his closest friends and staunchest defenders -- Joseph Hooker and Thomas Huxley.
Labels: Darwin's Bicentenary People in Science