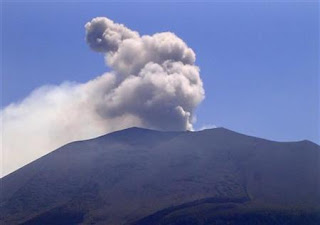 Japan's Mount Asama has erupted, throwing hot rocks out of the crater and depositing a fine layer of ash on parts of Tokyo, some 90 miles to the southeast. Mount Asama is known for a huge eruption in 1783 that caused widespread damage and killed around 1,500 people. This eruption has caused the evacuation of over 45,000 people in the surrounding area. The volcano has not yet erupted lava but is expected to in the coming hours. Mount Asama, one of Japan's more active volcanoes, had its biggest eruption in 21 years on September 1st 2004, spewing hot rock and raining ash on areas as far as 200 km (125 miles) away. That eruption, however, did not cause any major damage. 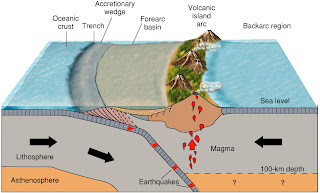 Volcanoes occur in Japan because it lies on the boundary between the Pacific and Eurasian tectonic plates. This is an example of an ocean/ocean convergent plate margin, where the Pacific plate is being subducted beneath the eastern edge of the Eurasian plate. Subducted plates are forced down to great depths where high temperatures cause melting and magma generation. Such margins result in the formation of a slightly curved line of volcanic islands known as an "island arc" (i.e. Japan). The relative movement of the two tectonic plates accounts for Japan's frequent earthquakes.
Labels: Geology Today's Science News