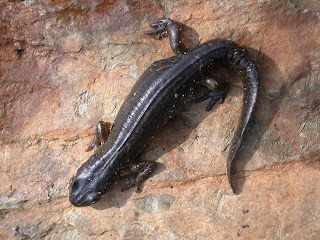 The Smooth or Common newt is Ireland's only tailed amphibian. Although a native member of our fauna, it is rarely seen and relatively under-recorded. This is probably partly due to its elusive nature and also because it is regularly mistaken for a lizard. They breed from February in weeded ponds and the female lays her eggs singly, attaching them to underwater vegetation. Newts do not have territories, though the male does need some time to reach breeding condition. Newts spend up to four months of the year in water. The male has large black belly spots, whereas the female has a speckled belly. During the breeding season the male develops a crest along his back and the belly becomes a rich orange. Newts engage in elaborate courtship dances during breeding. Tadpoles develop into small newts and they mature in about eighteen months.

That's it for our Amphibians, but next week I will post something about our reptiles. Yes, we do have reptiles!