Today, February 12th, 2009 marks the 200th anniversary of the birth of Charles Darwin. Over the past few weeks we have presented a series of posts outlining the life, works and contributions of Charles Darwin to the world of science and beyond. Today, we end the series with a number of quotes from Darwin. We hope you have enjoyed the series and that you continue to check out the many interesting articles on the Frog Blog. I'm sure, if Darwin were alive today, he'd be checking out the blog every day. 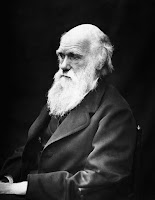 "I believe there exists, & I feel within me, an instinct for the truth, or knowledge or discovery, of something of the same nature as the instinct of virtue, & that our having such an instinct is reason enough for scientific researches without any practical results ever ensuing from them. "

"I have always maintained that, excepting fools, men did not differ much in intellect, only in zeal and hard work; and I still think there is an eminently important difference."

"A scientific man ought to have no wishes, no affections, a mere heart of stone."

"Among the scenes which are deeply impressed on my mind, none exceed in sublimity the primeval forests undefaced by the hand of man; whether those of Brazil, where the powers of Life are predominant, or those of Tierra del Fuego, where Death and Decay prevail. Both are temples filled with the varied productions of the God of Nature: no one can stand in these solitudes unmoved, and not feel that there is more in man than the mere breath of his body."

"As the sense of smell is so intimately connected with that of taste, it is not surprising that an excessively bad odour should excite wretching or vomitting in some persons."

"During my second year at Edinburgh [1826-27] I attended Jameson's lectures on Geology and Zoology, but they were incredible dull. The sole effect they produced on me was the determination never as long as I lived to read a book on Geology." (Sorry Jeremy) OK Humphrey - but see the posting above! JJS

"I have been speculating last night what makes a man a discoverer of undiscovered things; and a most perplexing problem it is. Many men who are very clever - much cleverer than the discoverers - never originate anything"

Labels: Darwin's Bicentenary On This Day People in Science