To mark our 150th post in The Frog Blog, we are launching yet another new feature - Famous Irish Scientists. In the first of the series, we will look at Sir Francis Beaufort. 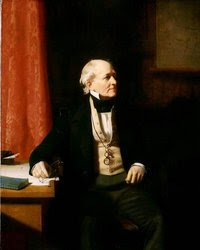 Francis Beaufort was born in 1774, near Navan in Co.Meath. He was the son of a rector. His father was well respected in the fields of geography and topography, publishing in 1792 one of the earliest detailed maps of Ireland. Beaufort had a passion for the sea, and at the age of 14 was sent to his father's friend Dr.Henry Ussher, Professor of Astronomy at Trinity College, for five months study at the newly founded Dunsink Observatory. At the age of 16, just three years after he began his nautical career, Beaufort began keeping a meteorological journal with brief comments on the weather, a practice he continued until his death. His actual career at sea was short-lived despite remaining in the British Navy until he was 81. While trying to escape local hostilities when patrolling pirates in the Eastern Mediterranean, Beaufort was shot in the groin by sniper fire. He fractured his hip and was never again fit enough to return to active sea duty. The original Wind Force Scale that Beaufort developed consisted of 13 degrees of wind strength, from calm to hurricane. This proved enormously useful for mariners - Captains knew what to expect when venturing into waters and an officer could tell from the ship's log if the ship could survive storm conditions. The Scale was eventually refined to 17 values, defined by ranges of wind speed at 10 metres above sea surface. So the scale changed from the Beaufort Wind Force Scale into the Beaufort Wind Speed Scale. From 1829 (at 55), he was appointed Hydrographer to the Admiralty and planned detailed surveys of all uncharted coasts, both at home and abroad. Beaufort's interest in making charts was a direct result of being shipwrecked at the age of 15 because he didn't have a map. Today, the sea north of Alaska is named the Beaufort Sea in honour of Francis Beaufort. He died in London, on the 17th December, 1857.
Labels: Famous Irish Scientists People in Science