Science Fact of the Week 9 - Diamonds 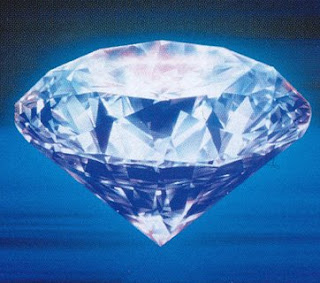 Diamond is composed of pure carbon. It is important to note, however, that diamond is an example of a network covalent compound. In the diamond structure the atoms are connected by covalent bonds, with each carbon atom bonded to four others in a tetrahedral shape. A diamond is the hardest natural substance on earth, however, if it is placed in an oven and the temperature is raised to about 763 degrees Celsius, it will simply vanish, without even ash remaining. Only a little carbon dioxide will have been released. Diamonds are formed over a period of a billion or more years deep within earth's crust - from 150km to 450km deep - and are pushed to the surface, by unusual volcanic activity, in magma which forms 'kimberlite pipes'. Kimberlite intrusions are important sources of diamonds (e.g. near Kimberly in S. Africa). Diamonds can also be recovered from rivers and the sea where exposed kimberlite has been weathered and eroded.
A diamond is 58 times harder than the next hardest mineral on earth, corundum (from which rubies and sapphires are formed). It was only during the 15th century that it was discovered that the only way to cut diamonds was with other diamonds. Yet, diamonds are brittle. If you hit one hard with a hammer, it will shatter. The world's largest diamond was the Cullinan (shown below), found in South Africa in 1905. It weighed 3,106.75 carats uncut (One diamond carat is 200 milligrams). 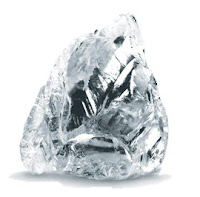 It was cut into the Great Star of Africa, weighing 530.2 carats, the Lesser Star of Africa, which weighs 317.40 carats, and 104 other diamonds of nearly flawless colour and clarity. They now form part of the British crown jewels. The Cullinan was three times the size of the next largest diamond, the Excelsior, which was also found in South Africa. The world's largest documented polished diamond - unearthed in 1986, also in South Africa - is called Unnamed Brown. It weighs 545 carats and was cut down from a 700 carat rough diamond. It took an international team of expert cutters 3 years to complete the masterpiece. Another impressive diamond that also took 3 years to cut, and also is part of the British crown jewels, is the Centenary Diamond. It weighs 273.85 carats and is the world's largest flawless diamond. Not all diamonds are white. Impurities lend diamonds a shade of blue, red, orange, yellow, green and even black. A green diamond is the rarest. Diamonds actually are found in fair abundance; thousands are mined every year. 80% of them are not suitable for jewellery - they are used in industry.
Labels: Chemistry Stuff Science Fact of the Week