Science Fact of the Week 10 - Snow

Snow fell heavily in St. Columba's this week, so what is it and how is it formed? 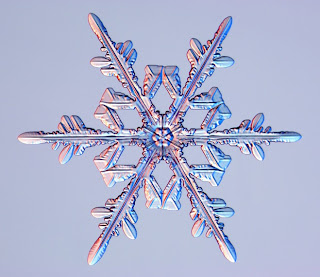 Snow is formed when water vapour is deposited in the higher reaches of the atmosphere at a temperature less than zero degrees celsius, and then falls to the ground. Snow is less dense than rain, which explains why the same amount of moisture produces a greater volume of snow than rain. Snow is a granular material formed by precipitation and it is in the form of small rough particles of crystalline water ice. It has a soft, open structure unless it is packed by external pressure, and forms a variety of snowflakes. Snowflakes are typically symmetrical, hexagonal-shaped groups of ice crystals that form while falling in and below clouds. The occurrence of snowfall depends on various factors such as the season, location, the latitude and elevation of the place.
A snowflake starts out as three ingredients, water vapour, ice crystals, and dust. Ice crystals form when water vapour freezes on a microscopic piece of dust. This dust can come from volcanoes, flower pollen, meteorites falling stars, soil erosion and much more. Snow begins forming in a very cold cloud that has both super cold water droplets and ice crystals. When water vapour droplets collide with a piece of already formed ice crystal, the droplet freezes to it making it grow into a slightly larger new ice crystal. The shape of the snow crystal is determined by the temperature in the cloud. The size of an ice crystal is determined by moisture in the cloud. The more moisture there is, the bigger the crystals will be. When many ice crystals stick together and fall, they are called "snow crystals." This is what we call a "snowflake." As it falls from one cloud, it will pass through other clouds with a different temperature or moisture level and change shape and size of the snowflake. It may combine two different shapes. The speed of the snowflake falling can also change the shape of the crystal. Despite all these changes happening as the snowflake falls, you can still find single ice crystals in any snowfall. There are 7 main types of ice crystal shapes but as we know, they can change shape as temperatures change in the air, or if they combine with other ice crystals of another shape.
Labels: Nature Notes Science Fact of the Week