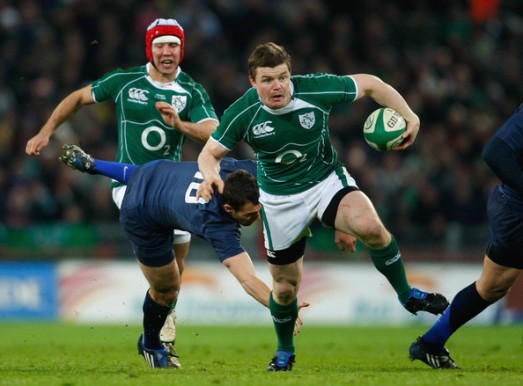 Brian O’Driscoll is one of the best rugby players, so how does he do it? Claire O'Connell explores in this month's edition of BANG - the Irish Times Science Monthly for teens (and grown ups too)!
Run Brian, Run - When you have a rugby ball tucked under your arm and a bunch of fired-up players hell bent on tackling you to the ground, you need to run fast. And to do that you need to use your muscles.
Many muscles contain different types of fibres: slow twitch fibres that you use for endurance and fast twitch fibres for more rapid, explosive movements. The fast twitch ones are what you use when you jump to catch a ball, or when you sprint up the pitch to get away from opponents or score a try.
BOD is renowned for having a low centre of gravity, the point around which mass is evenly distributed. What’s so good about that? Quite a lot, if you want to be able to swerve around players easily, or scoop up a rugby ball on the run.
Having a low centre of gravity makes an object, or in this case a body, more stable – the centre of mass is relatively close to the ground, so it takes more energy to topple it.
Your centre of gravity is usually near your bellybutton, and when you take a wide stance and crouch down and forward you bring it lower to the ground. That way you give yourself a broader base and you can keep your balance more easily if you get a knock.
Centre of gravity is also an important factor when designing cars and buildings, to make them more stable.
Risk factors - One of the most infamous moments in rugby was the spear tackle in New Zealand in 2005 that dislocated O’Driscoll’s shoulder.
Rugby is a full-contact sport, and experts have estimated that there are about 91 injuries per 1,000 player match-hours, and it is tackles and collisions that are most likely to lead to injury.
In 2008 the British Journal of Sports Medicine examined video footage of rugby union games in England and worked out that significant risk factors for ball carriers and tacklers included going into the tackle at high-speed, high impact force, collisions and contact with a player’s head/neck.
The gear - In rugby, it’s not just what you do, it’s what you wear doing it. Rugby shirts have become more high-tech, with the more traditional cotton being replaced by synthetic fibres because they are less likely to get bogged down with water. They are more slippy too, making it harder for opponents to grab and hold on.
The ball has also evolved – in the early days rugby was played with an animal bladder that someone had the not-too-enviable task of inflating.
Today though, the ball is more streamlined and oval, making it easier to pass.
Concussion - Your brain is precious cargo. That’s why it’s encased in a hard skull, to help protect it. But a belt on the head can still knock your brain about even if the injury doesn’t actually fracture or break that bony bucket.
The brain has the consistency of a blancmange, and a hard blow to the head can send it sloshing against the skull. If you are concussed you may have a change in awareness or attention and perhaps other symptoms such as a headache, dizziness, foggy thinking, difficulty concentrating, drowsiness and loss of balance.
Concussion always needs to be taken seriously, and in 2009 it ruled O’Driscoll out of part of the Lions tour.
Labels: Irish Times BANG