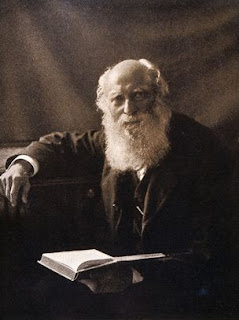 George Johnstone Stoney was born on this day, February 15th, in 1826. He was an Irish physicist most famous for introducing the term electron as the fundamental unit quantity of electricity. G.J Stoney was born near Birr in Co. Offally, in the midlands, and educated at Trinity College Dublin where he received his B.A in 1848 and began working as an assistant to the astronomer William Parsons, at his observatory at Birr Castle, where Parsons had built the world's largest telescope, the 72-inch Leviathan of Parsonstown (which is still there and open to visitors). He remained working with Parson until 1853, after he had completed his M.A, when he was appointed professor of natural philosophy at Queen's College, Galway.
Stoney is best known for his introduction of the term ‘electron’ into science. Although he is reported to have spoken of “an absolute unit of electricity” as early as 1874, his first public use of the term in print was in 1891 when he spoke of “these charges, which it will be convenient to call electrons” before the Royal Society of Dublin. He did however make more substantial contributions to science than this and in early spectroscopy his work was of considerable significance. He began, in 1868, by making a crucial distinction between two types of molecular motion. There was the motion of a molecule in a gas relative to other molecules, which Stoney was able to exclude as the cause of spectra. There was also internal motion of a molecule, which according to Stoney produces the spectral lines. He went on to tackle, with little real success, the difficult problem of establishing an exact formula for the numerical relationship between the lines in the hydrogen spectrum. This problem was ultimately solved by the quantum theory of Niels Bohr. For more information on GJ Stoney visit the Ingenious.ie website here.
Labels: Famous Irish Scientists On This Day