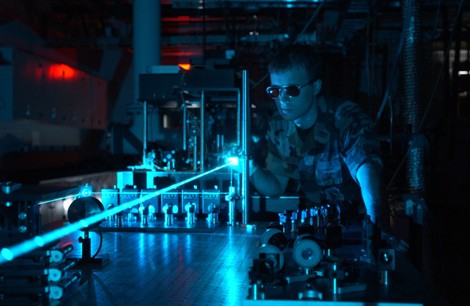 In what might seem more in the realm of science fiction or a Bond movie, scientists have developed the first "anti-laser"! Lasers are narrow beams of light that emit photons but this new "anti-laser" absorbs light rather than emit it! By using a light absorbing material, the scientists were able to shine two laser beams, with similar wavelengths, at each other and they cancelled each other out! The new anti laser absorbed 99.4 percent of incoming light during the experiment but the scientist believe that they could be used to absord 99.9999% of light. So what could anti lasers be used for? Well, future computers may use light to transmit signals instead of electricity. Anti lasers could be used as optical switches or message detectors in these "optical computers". Other potential uses include radiology and imaging (or helping Bond defeat a mad man with a giant laser?) Exciting times!
Labels: Physics Stuff Today's Science News Todays Science News