Astronauts Land on Mars - Sort Of! 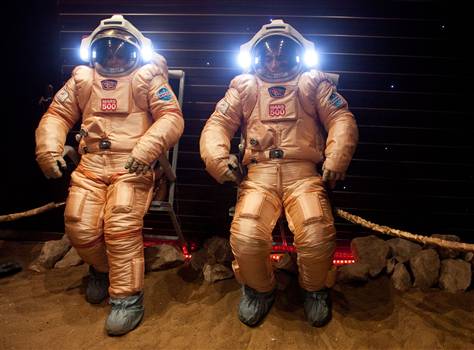 Last June we reported that the European Space Agency (ESA) were planning a 500 day mission to nowhere. In fact, they were starting a 500 day simulated mission to Mars, without actually leaving Moscow. Well now, after 250 days of simulated flight, six astronauts have finally reached Mars, well kind of. The Mars 500 project is run by Russia's Institute of Biomedical Problems with the participation of the European Space Agency (ESA). The highly trained crew are is made up of three Russians, two Europeans and one Chinese citizen (Alexander Smoleevskiy, Sukhrob Kamolov, Alexey Sitev, Diego Urbina, Romain Charles and Wang Yue). They have now reached the mid-point of their mission and are preparing for a space walk on the Martian "surface", wearing spacesuits and simulating geological investigations and other experiments.
The mission aims to investigate some of the psychological and physiological effects that humans might encounter on a long-duration space-flight. Conditions are kept realistic, even with a 20 minute radio delay between mission control and the cosmonauts. Mission control even mimicked emergencies during the past eight months, including blowing smoke into the module and cutting power for a day. However, probably one of the most significant issues with a mission to Mars, constant exposure to weightlessness for 500 days, could not be simulated during the experiment. The six crew members are due back on Earth in November!
Labels: Today's Science News Todays Science News