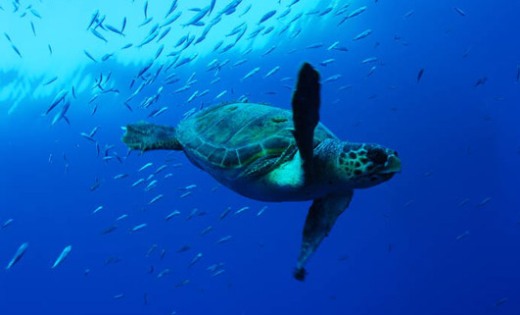 Loggerhead turtles (Caretta caretta) breed on the shores of the Mediterranean, West Africa, Brazil and along the south-east coasts of the U.S. Within 24 hours of hatching, they enter the sea, for the start of an epic swim that sees them loop clockwise around the Atlantic Ocean for thousands of miles until the females return to their birthplace to nest several years later. Just how they managed to navigate the oceans, avoid treacherous currents and return to their place of birth was a mystery to scientists, until now.
A team of researchers from the University of North Carolina have found that the turtles are able to pick up on magnetic signatures that vary across the Earth's surface in order to determine their position in space, both east-west and north-south.
The Earth's magnetic field lines are parallel to the Earth's surface near the equator and grow steeper as one reaches the poles. The magnetic field also varies in intensity, being generally strongest near the poles and weakest near the equator. Somehow the turtles are able to create a mental magnetic map by combining information about the angle of the magnetic field with its intensity - a kind of built in Sat Nav. Other animals, such as migrating birds, can also detect magnetic fields and the scientists believe that turtles may have similar "magnetoreceptors" in their brains.
Sometimes this magnetic map doesn't work properly, as we discovered a few months back when a young loggerhead turtle strayed into cold Irish waters. Click here to read a previous Frog Blog post on the "little migrant" or Imrrceach as he was named.
Labels: Today's Science News Todays Science News