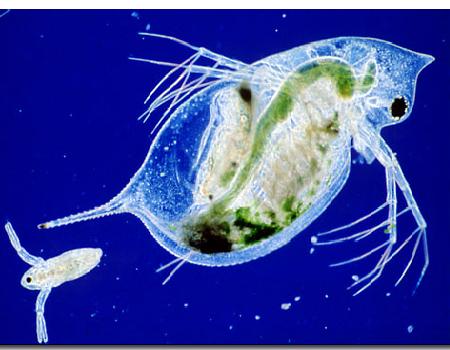 Scientists have sequenced the genetic make-up or genome of the water flea (Daphnia pulex), revealing some incredible findings on this minuscule creature. This tiny (often less than half a millimetre), translucent water flea, that can reproduce both sexually and assexually and lives in ponds and lakes, has actually got more genes than any other living creature, including the human. The new study, released today in the journal Science, reveals that Daphnia pulex has 31,000 genes compared to humans who have about 23,000, making it the most complex genome of any animal sequenced so far. Many of Daphnia's genes are found in humans, more than any other insect or crustacean so far known to scientists, but they also have a huge number of unique genes (almost one third) and many of these were previously unknown to science. The reason for the high number of genes is believed to be linked with gene duplication in the tiny animal. The research will aid scientists with the study of the effects on pollutants on humans and Daphnia has now been nicknamed the "modern canary in the mineshaft" - an early warning system for pollutants and their effects on humans. Click here to read a piece in today's Irish Independent about this new finding.
Labels: Marine Biology Nature Notes Today's Science News Todays Science News