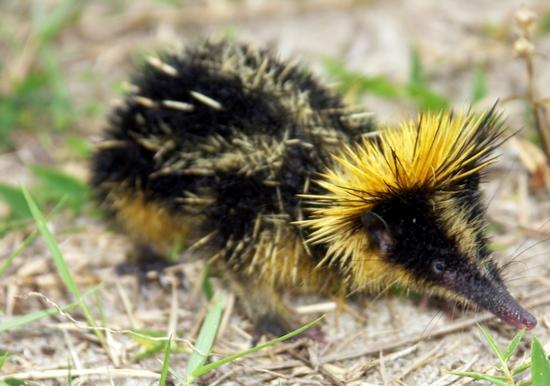 The Tenrecs are a group of weird and wonderful animals native to Madagascar. Hedgehog like in appearance, this diverse group of creatures live in a wide variety of habitats from aquatic to arboreal. Tenrecs are classified as insectivores but have evolved to fill a variety of ecological niches filled in other lands by hedgehogs, mice, shrews, opossums, and even otters. While a few species of tenrec are found in central Africa, they are most diverse in Madagascar which has around 30 species.
The Streaked Tenrec (Hemicentetes semispinosus) is a small tenrec found in Madagascar, Africa. It grows up to 19 cm in length and weighs up to 275 grams. It feeds on worms and grubs, does not have a tail and lives in groups of 15 or more animals. The species gets its name from the distinctive two-tone color of black background with yellowish brown strips running the length of the body. Its fur is coarse with barbed spines and a dense patch of spiky yellow bristles on its crown. But one of the most peculiar behaviours of the streaked tenrec is its ability to communicate with each other using "stridulation", the rubbing together of specialised quills on their backs producing high pitch ultrasound calls. Other tenrecs can then hear these calls through the forest undergrowth while other animals can not. Stridulation is not unique to this tenrec with animals such as crickets, beetles and vipers all known to communicate by rubbing together body parts. But the tenrec is the only mammal to do this and, amazingly, is also able to communicate using high pitched tongue clicks. Both of these sounds are not audible to humans, so specialised equipment was needed to detect them. A BBC film crew have, for the first time, recorded the tenrec demonstrate stridulation. Click here to visit the BBC News website and watch their amazing video.
Labels: Nature Notes Today's Science News Todays Science News Weird and Wonderful Animals