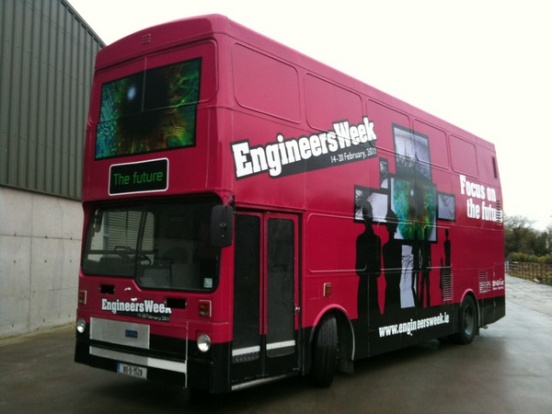 Jay Kim, Form IV, recalls her trip to the Engineers Week CSI Workshop yesterday and some of the activities they carried out.
We arrived at our destination, a funky, luminous pink bus, parked outside the Tallaght Civic Theatre - quite a change from the typical museums or galleries that we see. For the day we were to become CSI trainees and were to be put through our paces exploring the different techniques used by forensic officers perform.
After ascending to the top floor of the funky bus, we took our seats in the "lab" and set about our first task  - a series of mathematical quizzes. The first quiz took a closer look at the Fibonacci sequence. The Fibonacci sequence is a series of numbers whereby each number is the sum of the previous two numbers, for example- 1,1,2,3,5,8,13 .. and so on. Nature seems to follow the Fibonacci sequence, like the number of the flower petals in almost all flowers would be a Fibonacci Number. A rare flower wouldn’t follow the Fibonacci sequence, and that’s why the lucky four-leaf clover is very hard to find. Recognising patterns is key to forensic science!
In another puzzle, we had to identify different images cropped out from a large picture. One of the pictures was a close-up photograph of spores, and spores are often used in forensic science. If forensic officers know what the expected production and dispersal patterns of spores and pollen are for the plants in a given region, then they will know what type of ‘pollen fingerprint’ to expect in samples that come from that area. They could then test the suspect’s clothes or shoes to see if they contain any pollen from the specific area that the crime had been committed.
When there is a crime scene, the one of the first procedures for the forensic officer is to check for fingerprints. Everybody has a unique fingerprint and there are different patterns - loops, whorls and arches. The loop pattern is the most common fingerprint pattern, and if you are a criminal, it would be a lot harder to catch you, whereas, the more unique your fingerprint is (perhaps the mixture of all patterns), the more easier for the police to catch you. We made fingerprint stamps, and identified which patterns our fingerprints were. We also tried the powder analysis technique, which was extracting fingerprints from a surface with a sticky tape.
The trip was really interesting, as it was something different, because we personally had the chance to be mini-CSI investigators. Also it was a totally different experience, learning in a double decker bus.
Labels: Science Trip Reports