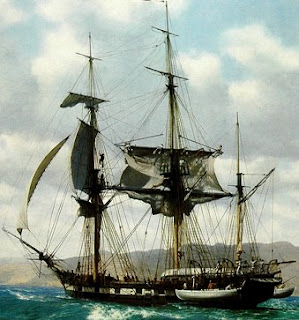 The offer of a position on the Beagle, which Charles received on August 30th, 1831, came through his advisor, Henslow, at Cambridge. Henslow himself had been invited to be the naturalist for the ship, but had turned down the opportunity. The voyage had been commissioned by the government to map the coast of South America and was being captained by Robert FitzRoy, a 26-year-old gentleman who had led an expedition to South America the year before. FitzRoy was eager to have the companionship of someone who, unlike the sailors and officers of the ship, was of his social class. A gentleman naturalist would fit the bill perfectly, providing companionship while increasing the usefulness and prestige of the voyage. Most well-established naturalists, like Henslow, had proven to be busy or disinclined, so the job had fallen to the promising but inexperienced Charles Darwin. Despite the objections of his father Robert, and numerous failed attempts to launch due to bad weather, Charles finally began his voyage on December 27th, 1831.

At the beginning of the voyage of HMS Beagle, Darwin was almost incapacitated with seasickness. He swung miserably in his hammock in the small cabin he shared with several of the ship's officers or hung by the rail of the ship. Eventually, the nausea passed away and he was able to focus on the voyage itself. The ship's first stop was meant to be Tenerife in the Canary Islands, the same place that Darwin had hoped to visit with Henslow. Unfortunately, because of a recent cholera outbreak in England they would have been quarantined for twelve days before landing, so Captain FitzRoy gave the order to set sail for St. Jago in the Cape Verde Islands, 300 miles off the African coast. Along the way, Darwin began his work as a naturalist by collecting plankton. When they landed at St. Jago he hiked through the volcanic hills, encountering his first tropical jungle in a small valley and seeing real evidence of geological change: a layer of compressed sea shells in the cliffs thirty feet above sea level. Leaving St. Jago on February 8th, 1831, they stopped at St. Paul's Rocks to kill birds for food, then crossed the equator on February 16th.

They reached South America at Bahia, at All Saints' Bay, on February 28th - where they spent several weeks before departing for Rio on March 18th. On arriving, on April 5th, Darwin received letters from home for the first time since leaving England. Over the next few months and years, as the Beagle surveyed the coastline, Darwin explored the interior. He starting filling books with notes on the flora, fauna, and geological formations he encountered. He hunted and collected, setting aside samples to be sent to Henslow in England. Darwin even took part in a very successful Andes expedition. Towards the end of his trip, the Beagle headed west and on September 15th 1835 the team soon caught their first glimpse of the Galapagos Islands, which Darwin was later to make famous.

The Beagle returned home on October 2nd, 1836, nearly five years after he had departed. Darwin returned home with a massive amount of scientific data and a developing theory in his head.
Labels: Darwin's Bicentenary People in Science

Jim said…
Great read! Thanks, Ive always been fascinated with Darwin.
2:50 am