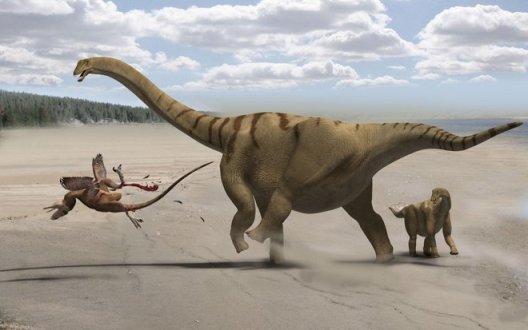 A new dinosaur named Brontomerus mcintoshi, literally meaning "thunder-thighs" in Greek (after its enormously powerful thigh muscles), has been discovered in the U.S. state of Utah. A member of the long-necked sauropod group of dinosaurs, which includes Argentinosaurus, Brontomerus may have used its powerful thighs as a weapon to kick predators, or to help travel over rough, hilly terrain. Brontomerus lived about 110 million years ago, during the Early Cretaceous Period, and probably had to contend with fierce "raptors" such as Deinonychus and Utahraptor.
The fossilized bones of two specimens of Brontomerus mcintoshi - an adult and a juvenile - were discovered from a previously looted and damaged quarry in eastern Utah by the researchers from the Sam Noble Museum in the United States. Paleontologists speculate that the larger specimen is the mother of the younger and would have weighed around 6 tonnes, about the size of a large elephant, and measured 14 meters in length. At a third of the size, the smaller specimen would have weighed about 200 kg, the size of a pony, and been 4.5 m long.
Labels: Dinosaurs Palaeontology Today's Science News Todays Science News