Stanley L. Miller - On This Day 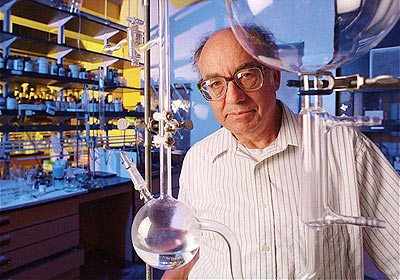 American chemist Stanley L. Miller was born on this day in 1930 in Oakland, California. He is famous for one of the most exciting and remarkable experiments ever carried out in Biology - giving us clues about the origin of life itself.
Building on the work of Oparin and others, Miller recreated the proposed atmospheric conditions of the early Earth and simulated Oparin’s suggested process of ‘molecular evolution’ – seen as a likely precursor to the origin of life. His findings, which were published in 1953 in the journal Science (A Production of Amino Acids Under Possible Primitive Earth Conditions), showed how the application of an electric discharge (to simulate lightning) to a circulating atmosphere of methane, ammonia, steam and hydrogen produced the amino acids glycine, α-alanine and β-alanine – rather than a random mixture of organic molecules. Amino acids are the building blocks of protein, and are just the sort of molecules suggested by Oparin’s hypothesis that the biomolecules needed for life could have been generated naturally on Earth before life existed.

Miller only became involved with this field of research because his original doctoral supervisor Edward Teller, a nuclear physicist, left Chicago University. Having attended a lecture by geochemist Harold Urey on the Earth’s primitive atmosphere, Miller decided to ask Urey to take him on. The story goes that Urey tried to dissuade Miller at first, thinking the work would take too long, but luckily Miller persisted. Urey was already a Nobel prize winner and generously suggested that Miller’s findings should eventually be published as a single author paper.
Subsequent work by Miller and various others has shown how a wider variety of biomolecules could have been produced in the Earth’s primitive atmosphere, although some people have suggested that early conditions were not as reducing as supposed. Wächtershäuser and others have even suggested that the first biomolecules may have been formed in unusual volcanic conditions rather than as originally proposed by Miller. Subsequent analysis of some of Miller’s original material, using more precise techniques, has shown that in fact his experiment produced far more amino acids than he realised. Interestingly, the experiment he ran which recreated conditions in a volcanic environment produced the most diverse results. The debate continues!
Having spent much of his life as an academic chemist in the University of San Diego, Stanley Miller died in 2007 in California.
Labels: Biology Stuff On This Day People in Science