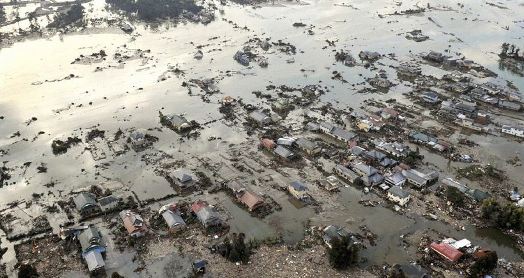 There are now considerable fears of a meltdown at Japan's earthquake stricken nuclear power plant at Fukushima as efforts to cool the reactor are moved up a gear. An explosion has been heard at the power plant in the last hour which has caused damage to the external walls and radiation levels are increasing significantly, now at 20 times normal levels. Japan's Prime Minister Naoto Kan declared a state of emergency at the Fukushima power plant as engineers try to confirm whether a reactor at one of the stations has gone into meltdown. There may be only hours before a meltdown is prevented.
Of course all of this is a direct result of yesterday's massive 8.9 magnitude earthquake (8000 times stronger than last month's earthquake in New Zealand) which struck 250 miles from the capital Tokyo, off the country's north-eastern coast. The earthquake triggered a destructive 10m high tsunami which swept through coastal towns and village across Japan's north island. The tsunami's effects were even felt as far away as the US west coast. There were reports of ships and trains being swept away on the mammoth wave and the death toll has now reached over 700. This figure is expected rise as the number of people missing is still over 1000.
Labels: Today's Science News Todays Science News