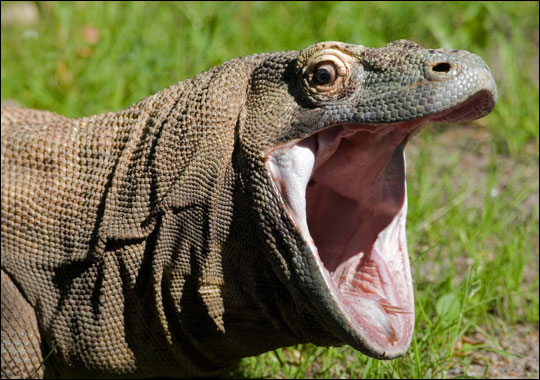 The Komodo Dragon, also known as ‘Varanus komodoensis’ is the Earth´s largest and heaviest lizard. It belongs to the phylum of ‘Chordata’ and the family ‘Varanidae’. The lizard was unknown to the Western world until the beginning of the 20th century as Komodos only live on the Indonesian islands of Rinca, Gili Dasami, Gili Montang and Komodo where it has its name from. The dragons also used to live on the islands of Flores and Padar but seems to be extirpated or at least very rare today.
On average Komodos reach a length of about 2.5m but there have been animals with a size of up to 3m weighing between 70kg and up to 100kg. The unusual size of the komodo dragons is most likely related to the fact that there are no other carnivorous animals living on these islands. It is believed that the komodo dragons are relatives of the very large varanid dragons that once lived across large parts of South-East Asia but have become extinct after getting in contact with humans. Komodos have a strong sense of smell and they can detect prey over a distance of up to 8km. They can swim very well, they are agile and fast moving on land and they are even able to climb trees.
Komodo dragons have about 60 teeth at a time in their mouth which can be replaced if there is need to. Besides a venom gland in the Komodo´s mouth which disables attacked prey the mouth is also full of virulent bacteria which makes it very dangerous for their prey, in case that it survives an attack of a komodo dragon. The Komodo´s diet consists of various mammals like small deer and pigs as well as birds and invertebrates but there have also been cases of cannibalistic behaviour. It takes the dragons about 3 years to mature and their life expectancy varies between 20 and 40 years. Most of its lifetime a Komodo spends on its own except for the breeding and mating season between May and August. Around 20 eggs are laid by the female in September into burrows at the sides of hills. This is followed by an incubation period of 7 to 8 months.
In general, Komodo dragons are of no danger for humans although there are some records of attacks in which some humans even got killed. Nowadays Komodo dragons are close to extinction as they are considered as a vulnerable species on the IUCN Red List. The biggest threats to the lizards are volcanic activity and loss of prey but also tourism which causes a decrease in territory for the dragons to live in. Experts believe that there are only about 3.000 to 5.000 animals left, living in the wilderness today plus a couple of thousands living in captivity in zoos all over the world. Komodo dragons are extremely interesting animals that reveal a lot of secrets about other, similar animals that have lived on this beautiful planet in the past but have become extinct. We have to make sure that these last remaining creatures of the past won´t become extinct, too by protecting them and the environment they live in.