Our Planet, Our Home - What is its Future? 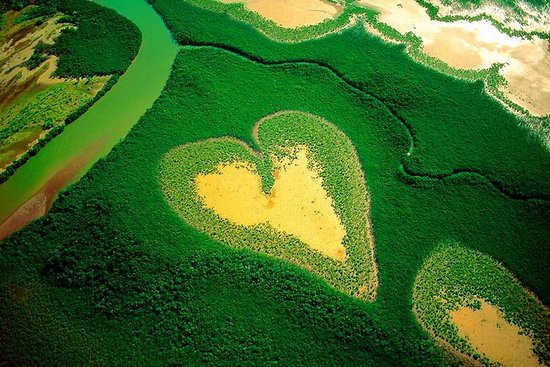 Some of our Transition Year pupils were recently involved in a competition run by the Three Rock Churches' Environmental Group, in which they had to write an essay entitled "Our Planet, Our Home - What is its Future". As preparation for this they watched the Yann Arthus-Bertrand film “Home”, which contains stunning landscape cinematography (like the picture above) and a pretty hard-hitting message about the state of the planet. This easy-to-watch 90 minute film can't be recommended strongly enough and is available to view on YouTube in full for free!
Here is Aifric Tracey's essay, and we will be posting some of the other entries over the next few days.
When you think about the Earth and how, we as humans are affecting and changing it, it is quite astonishing. In 10 or 20 years time our planet could be nearly unrecognisable. We need to start thinking about the resources we are consuming. There are so many alternative ways of making energy that won’t damage our planet. But still we don’t use them. We are too stuck in our ways to change. Renewable energy resources include: solar power, wind power, hydro power, geothermal power etc. Amazingly enough, one hour of sunshine on Earth delivers enough energy for the entire human population for a whole year.
In our Biology class we watched the movie called Home. It was really interesting and some of the facts and figures presented were almost unbelievably scary. Since 1950 the world’s population has tripled, and over-population is becoming a huge problem. There is overcrowding in so many countries and because global warming is affecting the climate, it is making living conditions much harder. Ever though Nigeria is the biggest oil producer in Africa, 70 % of its population lives below the poverty line. An astonishing half the worlds wealth is held by just 2% of the world’s population. 5000 people die each day due to polluted water and poor sanitation (mainly babies). 1 billion go hungry. 20 % of the world’s population consumes 80 % of the world’s resources. Things need to change and start being shared evenly, otherwise only more and more people will die. This century 9 billion lives are held in the balance of life or death, due to what we have done.
If global warming and the severe climate changes don’t stop there will be huge problems. The Arctic ice cap has melted by 40 % in 40 years. The icecaps might completely disappear by 2039, maybe even 2015. Greenland’s ice holds 20 % of the world’s fresh drinking water and if this melts the sea levels will rise by 7 metres. Sea levels are already rising 1 cm per year due to the expansion of water caused by global warming. Snow and ice on mountains such as Kilimanjaro and the Himalayas is beginning to melt away, and more than 2 billion people depend on water from the rivers fed by this. Rapid melting causes river levels to rise catastrophically, which could cause terrific damage and ruin may people’s land and lives. It is estimated that there will be 200 million climate refuges in 2050. In recent years refugee camps as big as cities have already started to grow up. 70 % of the world’s population live beside or near water – causing potential problems with pollution, but only 2 % of governments have legislation to protect their aquatic environments.
Recently we have recorded the highest atmospheric CO2 levels in over 100,000 years. this causes global warming, which in turn is upsetting the Earth’s climatic balance. Permafrost (where the ground remains constantly frozen) covers underground methane deposits in parts of Siberia. Methane is 20 times more effective as a greenhouse gas than CO2. If global warming causes melting of the permafrost, allowing the methane gas to escape into the atmosphere, it will have a devastating effect on our planet.
Labels: Biology Stuff Climate Change Environment Fragile Earth Global Warming Pupil Work Transition Year

Catherine Cronin said…
What a well-written and thought-provoking essay, Aifric. It is up to each of us to accept responsibility for making changes in our own lives, as well as to educate and inspire others to change. Your essay certainly educates and inspires! It's wonderful that your essay has been published on the web by your school. I will be able to share this with others. It gives me hope to know that young people, like yourself, are engaging with these issues and advocating for change. Keep up the great work!
12:50 pm