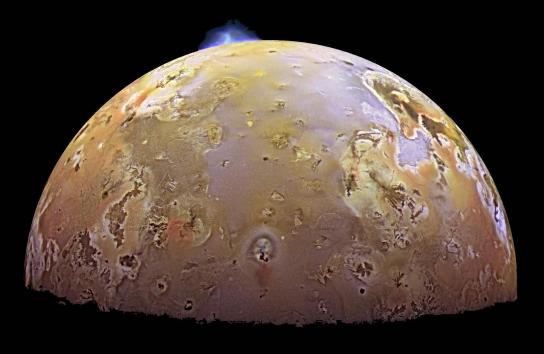 On this day in 1979, Voyager 1 discovered a 300 km tall volcanic plume rising from the surface of Io – one of Jupiter’s moons. Io has since been recognised as the most volcanically active part of the Solar System.
Io is slightly larger than Earth, and is one of the 4 major moons of Jupiter discovered by Galileo Galilei in January 1610. The surface has over 400 active volcanoes and mountains reaching up to 16 km in height. The volcanism is largely sulphurous with volcanic plumes of frozen sulphur dioxide being thrown 500 km up into space. The volcanism seems to be driven by the tidal gravitational effects of Jupiter and its other moons, causing regular bulging and collapse of Io’s surface.

Voyager 1 was launched by NASA in 1977 to explore the gas giants Jupiter and Saturn, and more details of its mission can be seen here, including a running display of its current distance from planet Earth! There is also a previous Frog Blog post on Voyager here.
Labels: Astronomy On This Day Space Exploration