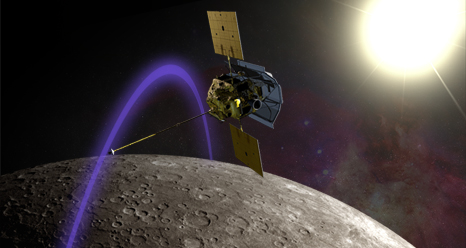 Earlier this morning NASA successfully navigated their MESSENGER spacecraft (which stands for MErcury Surface, Space ENvironment, GEochemistry, and Ranging) into orbit around Mercury, the first time a spacecraft has accomplished this engineering and scientific milestone.
Messenger's main thruster fired for about 15 minutes as it slowed and entered Mercury's orbit about 96 million miles (154 million kilometers) from Earth. Shortly afterwards, NASA engineers received signals confirming the insertion of the probe with no known errors.
Launched back in August of 2004 to study the geology, chemical composition and magnetic field of the planet, MESSENGER carries several advanced scientific instruments, including a neutron spectrometer and magnetometer. The spacecraft has orbited the sun a dozen times and flown past Venus twice.
In coming days, NASA will focus on ensuring the spacecraft's systems are functioning in Mercury's harsh thermal environment. If all goes well, MESSENGER should begin transmitting images and information back to Earth in about two weeks.
This is not the first time a NASA craft has been sent to the inner most planet. Mariner 10 flew past several times to photograph the surface, grabbing images of massive craters, cliffs and small mountain ranges. Likewise MESSENGER snapped photographs of the planet's surface on fly-bys to help position itself for orbit. To find out more about the planet Mercury, click here to read a previous Frog Blog post.
Labels: Feats of Engineering Space Exploration Today's Science News Todays Science News