Skip to main content
Labels
Posted by Unknown May 27, 2009 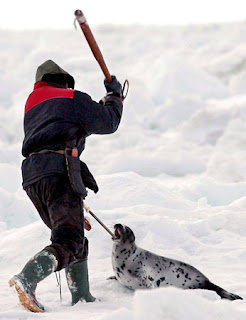 A ban on the sale of products from seals was passed by the European Parliament yesterday in an attempt to end their slaughter (the seals that is). The legislation will prohibit the import and sale in Europe of seal pelts and other products such as oil used in some omega-3 health supplements labelled “marine oil” or “Arctic oil” to disguise their origins. Seal fur — usually labelled as leather — is found in a wide range of consumer products, including coats, handbags, boxing gloves, shoe linings, collars and other adornments for garments. The ban, which was passed by 550 votes to 49, came after a long battle against seal clubbing backed by campaigners such as Sir Paul McCartney, who called it a “trade in animal cruelty”. It is likely to be challenged by Canada and Norway.
This is an extract from an article in today's Times. To see the full article click here. Have your say, email us to tell us what you think!
Labels: Today's Science News