Skip to main content
Labels
Posted by Unknown May 12, 2009 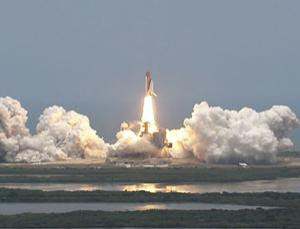 Seven astronauts took to the skies yesterday on the last space shuttle mission to service the Hubble Space Telescope. The mission is expected to extend Hubble's life until at least 2014 and provide it with its best vision yet. The space shuttle Atlantis successfully reached orbit about nine minutes after blasting off at 6:01 pm Irish time, from NASA's Kennedy Space Center in Cape Canaveral, Florida. The 11-day shuttle mission will be the last to visit the iconic telescope. Over the course of five consecutive spacewalks, astronauts will install six new gyroscopes that help the telescope stabilise itself, six new batteries, repair two new science instruments and will replace two others. 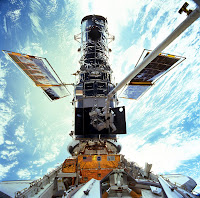 The Hubble Space Telescope is a space telescope that was carried into orbit by the Space Shuttle Discovery in April 1990. It is named after the American astronomer Edwin Hubble. Although not the first space telescope, the Hubble is one of the largest and most versatile, and is well-known as both a vital research tool and a public relations boon for astronomy. The Huble Space Telescope is a collaboration between NASA and the European Space Agency. It is set to be replaced by the James Webb Space Telescope which will be launched in 2013.
Labels: Astronomy Space Exploration Today's Science News