Skip to main content
Labels
Posted by Unknown May 20, 2009 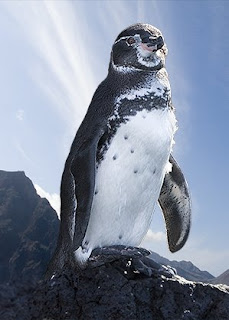 The Galapagos Penguins are found on the Galapagos Islands, off the coast of Ecuador. In fact, they are the most northerly of all penguins and the only penguins to live in the northern hemisphere (Isabela Island). It might seem hard to believe that penguins can live on the equator, but the waters around the Galapagos Islands are rich in food and the cold Humboldt current flowing up from Antarctica means the waters are rarely too warm. To keep cool in the warm environment, they spend a lot of time swimming. Being just over 35cm tall they are smaller and more duck-like than their southern cousins of the Antarctic. Adult penguins have a bluish-black head, back and flippers when new. Their underside is white with the exception of a black line along the side and scatter feathers on the chest. The Galapagos Penguins live in colonies feeding on small fish caught while swimming underwater. Galapagos Penguins mate for life. Nesting occurs throughout the year with the majority of nests being seen between May and January. Some penguins may mate as often as every 6 months. Female penguins lay 1 to 2 eggs each season. The eggs are laid in holes under the lava and the pair shares the responsibility of watching over the nest. The total population of Galapagos Penguins is a couple of thousand and most are found on the very inhospitable island of Fernandina.
Labels: Nature Notes Penguin Corner